HIGHER level of systemic risks, risks from slow failures or creeping risks and global governance gaps are the three themes that provide the backdrop in the Global Risks 2010 report issued by the World Economic Forum (WEF) last week.

Divided into five distinctive domains — economics, geopolitics, environment, society and technology — the report does not only point to the likelihood and severity of the risks but provides useful insights on the interconnection between the risks. Further fall in asset prices, slowing of China’s growth to less than 6%, fiscal crisis, global governance gap, chronic diseases and underinvestment in infrastructure are the key risks for 2010. 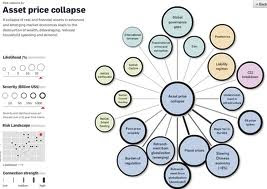 The fact that further fall in asset prices has been identified as the key risk for 2010 reflects the concern about how resilient the global economy is at the moment. The report cited the worry among experts about a lag in the impact of the recession experienced by the developed economies, particularly bankruptcies among small and medium enterprises, credit card defaults and unemployment. The fear now is that any new downturn would be liquidity driven rather than debt-driven like last time.

The reliance on China to be the saviour of the world economy on its own creates another risk; what happens if China fails to deliver? The report notes that the growth in China is fuelled by high credit growth which carries the risks of misallocation of capital and renewed asset bubbles. Failure by China to deliver would adversely affect the global capital and commodity markets.

Responding to the global financial crisis, many governments went into the pump-priming mode to ensure their economies remain inflated. Inadvertently, this results in some exposing themselves to unsustainable amounts of debt. Whether this will in turn result in pressure on their sovereign debt rating would be something to be observed this year.

The experts who contributed to the report identified global governance gap as the most significant source of risks in terms of interconnectedness. An example of this could be observed by the discussions by the G20 leadership on how to respond to the systemic failures associated with the recent global financial crisis.

The lack of results from the Copenhagen climate conference last year is also an example of how we are assuming more risks when governments fail to take the tough but necessary steps to address risks that are coming, albeit slowly.

Klaus Schwab, executive chairman of WEF, asserts that global risks, due to its endemic and systemic nature, can only be addressed through a fundamental overhaul of current values and behaviours.

Population growth, transmigration due to liberation of markets, longer life expectancy and changing dietary habits contributed to the increased risk of chronic diseases. This will further stress the healthcare infrastructure which is suffering from cutback in funding due to the economic crisis. This will further impact productivity and economic growth.

The report also highlights the findings of multiple studies across the world noting repeatedly that vast segments of our water, energy or transport infrastructure are structurally deficient or functionally obsolete, requiring considerable annual investments to avoid catastrophic failure.

There is much to be learnt from this report, especially for corporate planners and policymakers in Malaysia. The fact the interconnectedness and policy gaps are widely discussed makes it clear that we could not plan our future on our own as the world now is too interconnected for us to ignore how others are addressing the issues we are trying to address.

Just consider the sub-risks listed under the geopolitics category. International terrorism and specific Islamic countries are listed very clearly. Therefore, when there are issues which relate to religion developing here, we should not be surprised if some governments react swiftly although we may feel that things are still fairly under control here.

The interconnectedness of the risks requires a new paradigm of responding. Our government is generally structured based on specific mandates and powers. How would the various agencies react and respond to risks which are multidisciplinary in nature and cut across these mandates? If the past is an indication of the future, we tend to see things from narrow angles depending on the mandate of the people around the table. Is this a sustainable approach?

The final point about the report is that views were sought in arriving at the position taken in the report. It would be really great if Malaysians and Malaysian organisations are recognised as well. For this to be achieved, we need to demonstrate that our viewpoints matter.

We could certainly make more effort to demonstrate that we are also great at thought leadership. This is where various institutions set up by the government can prove that they are at par with the rest of the world. The private sector should certainly contribute as well.

Risks are there for us to take opportunity from. The sooner we understand how to do so, the better we would be in addressing the challenges of the future.

This article is also published at the Edge Malaysia website here: