Well it is the time of the year where business practically goes into standstill. Even if you are among the few odd ones who would like to do something (other than shopping), most of your business counter parties would not be around. Every body is on holiday until the new year.

I am not arguing that we should not take a break, in fact most of us deserve the break. However, the break does not mean that whatever challenges that we are facing are having their own break as well. Most indicators such at the stock prices, oil price as well as commodities are fluctuating like yo-yo, with the tendency of heading south.

Perhaps the holiday period could be used to reflect about what's coming in 2009. If sure everybody would be preparing for a very challenging new year given most developed economies would be in recession. Not sure whether too much reflecting and thinking would upset your holiday mood!

Well, to ensure something for next year is for you to figure out something along this line:
By being clear of the above, you are also clear how 2009 would be different.

So, holidays are not bad after all if you come out with better clarity of how the challenges in the new year would be faced.
on December 26, 2008 1 comment:

By this time, the 50 billion Madoff financial scandal does not surprise anybody anymore given that trillions of dollars had disappeared from the financial markets of the world. While questions around the scheme are not yet answered, especially on the role of SEC, the fact remains that even the smartest of investors such as HSBC trusted him and lost huge sums of money. Even Jewish educational institutions and charities were not spared. 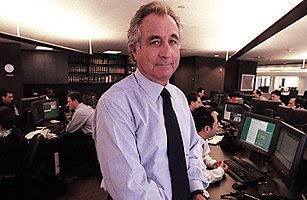 Forensic accountants are now hunting for what is left in the attempt to recover the lost loot. It will be interesting to observe how much would eventually be recovered and returned to the "unfortunate" investors. In addition to that, some investors are already suing accounting firms for negligent.

In spite of the preaching about corporate governance and the introduction of laws like Sarbanes Oxley, people would be the ones that actualise the spirit of corporate governance. Even if all the boxes could be ticked, if the hearts and minds of those given the trust are compromised, similar stories like the present Madoff episode would continue to appear in the future.

How many of those in charge of governance of organisations are fit and proper to do a good job? Their CVs may be impressive but doing a good job goes beyond that, it is about having real performance. It is about having understanding of the organisations and their surroundings, understanding strategic objectives, knowing risks, asking tough questions and demanding actions from the executive teams. If they don't think they can be different from others on the basis of principles and truths, maybe they should be reconsidering why they continue to serve their positions?

So, what are you doing to address the "heart" issue in the organisation that you are in now?
on December 23, 2008 No comments:

It was really a proud moment for me when the MIA launched a monograph entitled Soulful Stewardship - Steering corporations through human governance, during the last National Accountants Conference at KLCC. The monograph was written by Dato Professor Aziuddin Ahmad and Associate Professor Arfah Salleh from the Graduate School of Management, Universiti Putera Malaysia.
The monograph discusses about the need for a more holistic governance approach for corporations by focusing to the hearts of the people that run corporations rather that imposing regulation on corporations. The writers argue that we should consider the governance model that governs the human within the corporations that will be supplemented by the existing corporate governance framework.
The issues pointed out in the monograph is rather timely considering the position of the global economy which we are in at the moment. Looking at what triggered the melt down at Wall Street which later affected the "Main Street", greed will be one that would be cited most.
Since most of the management system applied by the companies that failed originated from the West, there is a great risk that we are also being exposed to the same pitfall. Soulful Stewardship is an attempt to direct the attention towards the real issue, people. While structure and process help in providing conducive environment for enterprises to operate, it would be the people that would eventually call and make the shots. Looks like it is time to go back to basic and address the issues that make the heart ticks towards the right direction.
on December 03, 2008 No comments: