I had to choose between Nasi Dagang or Nasi Kerabu for breakfast this morning. Both are Kelantanese cuisine which could be obtained in many food outlets around Kuala Lumpur. Eventually I went for the Nasi Dagang.

As I was enjoying my breakfast, two thoughts came to my mind. First, the taste of the Nasi Dagang is not the kind that I was used to when I was a little boy living in the middle of Kota Bharu, the capital of Kelantan. I lived with my grandmother who was very particular about food. She would walk to all corner of Kota Bharu for the sole purpose of bringing back the best food for us. You could imagine the size of Kota Bharu those days, everything was within walking distance. 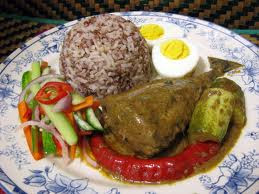 Being spoilt with carefully selected food in my younger years, I am having problem enjoying the present Kelantanese food. Very seldom I could find one with the taste that I was used to those days. Could it be that as the know how is passed from one generation to another the taste also changes? Or due to commercial pressure profitability is preferred over the pride of serving great food?

Second was the issue of expertise and supply. As business cost gets higher, only food with high demand would be viable to be sold. This will slowly phase out good traditional food which may not be popular due to lack of promotion. Eventually people would only prepare traditional food during special occasions such as festivities while the more commercialised ones would take up the space in modern outlets in shopping arcades.

If we observe how fast food from the West have been making their present felt in Malaysia, it appears that elements of globalisation include the competition for the survival of our traditional cuisine. It would be a great tragedy if some food that used to be enjoyed by our forefathers would not be around soon as the younger generation have different preference in their diet and appetite. Perhaps one way of saving traditional cuisine is to up scale how their are offered so that more could compete for limited spaces in modern shopping centres.

Who knows in the near future, traditional Malaysian food would be available across the globe.
on July 31, 2010 14 comments:

World Cup: Its Paul the Octopus VS Mani the Parrot

As we get closer to the final match between Spain and Holland, the attention of the world shifted to two new unexpected star of the World Cup. Paul the octopus has a track record of 6-0, its predictions on the winners had been spot on so far. Not to be left behind, Mani the parrot suddenly made its appearance in Singapore, predicting Holland to be the next world champion.

Would Paul or Mani eventually prevail?

Although at the early stages of the World Cup teams from South America were the hot favourites to advance to the final, the fight to be the world champion would be between two European teams, its present champion, Spain, and the team which played in World Cup finals before but never wins the championship, Holland.

Judging from earlier performance, the final should be explosive and exciting. while Holland has been scoring many goals, even against the mighty Brazil, the Spanish team had few scary experience in the earlier stage, especially when it lost to Switzerland. However, judging from how Spain was able the overwhelmed Germany in the semi-final would certainly set the expectation that Holland should not feel too confident of winning.

Coming back to Paul and Mani, the focus on their predictions could also reflect the disgust people have on the bookies, football gamblers who could be influencing the outcome of games from behind the scene. Although no serious allegation has been made against them so far, concern voices regarding the invisible hands of bookies tainting outcomes of sports matches is definitely not unheard off.

Perhaps greed has turned people into beings who are too focus on money and wealth and willing to do anything without bothering the consequences. Unfortunately, these sort of people do go around in suits and ties, pretending to be honourable people in the public eyes. 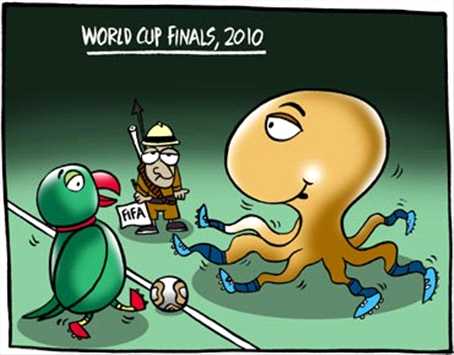 Disgusted with the behaviour of corrupt human beings, it is not a surprise that octopus and parrot like Paul and Mani are seen as more credible! At least they are not pretending that they really know the result. We are they ones who are making the claims!
on July 10, 2010 No comments: