As the last posting for 2010, it is again about an animal. This time it is about tigers, the Malayan Tiger which had just won the AFF Suzuki Cup Championship on Wednesday. Thanks to them, we in Malaysia are enjoying another public holiday today (forget the loss of productivity since most of us are already on the celebration mood) as some may have lost count of holidays that we have in a year. 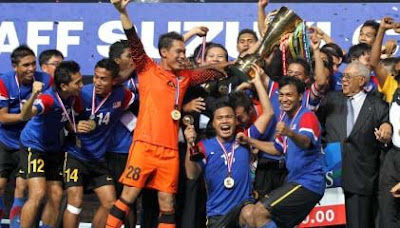 Many of us, especially who had the opportunity to experience the golden days of Malaysian soccer in the 70's and 80's, has lost hope on Malaysian soccer. I personally feel that while players come and go, the leadership of FAM remains about the same. So, if we are looking at the common denominator that is correlated to the performance of our soccer team, it is quite obvious as far as I am concern. More reform needed in the leadership of the FAM to enhance the future of our soccer.

Let me first congratulate Harimau Malaya. I started to watch their second semifinal game with Vietnam. Defending their 2-0 lead, they displayed character and maturity, something that I have not seen for a long time. Finally, we got a team of thinking players with great football skills!

I did not plan my Jakarta trip to coincide with the first final match between Harimau Malaya and Garuda. A Malaysian friend suggested that we watch the match at a "Malaysian" restaurant.  I thought it was a great idea since we will have the opportunity to support the tigers with fellow Malaysians. Well, it turned out that the four of us were the only Malaysians at that restaurants. The rest were Indonesian fans in their red shirts. There are thousands more within the vicinity. It was certainly a very different experience especially when we had to restraint ourselves from being seen to be too excited when Malaysia scored 3 goals but had to also clap when Indonesia made some good moves, part of risk management. We left the restaurant 10 minutes before the game was over.

A part from the issue of laser, politicians were blamed for the failure of Garuda in Kuala Lumpur. Being controlled by Golkar, the Indonesian soccer association got the players to be involved with events, sometimes involving politicians. This, to a certain extend, affected their concentration, especially when they are not yet crowned as champions. Definitely we need to learn something from this, especially when thinking about sustaining the performance as champions.

Whether the team should continue to be called Harimau Malaya or re-brand as Harimau Malaysia or even Harimau 1Malaysia, I feel we need to honour tradition. Not only the team abandoned the traditional yellow-black outfit in favour of the red-blue-white outfit (hopefully this reflect the colour of our flag) there are groups called for the name of Harimau Malaya to be changed to Harimau Malaysia. This could be something for us to debate in 2011.

Harimau Malaya finally roared at the close of 2010. I suppose this will be a stepping stone for a better future. We have debunked the myth that we are only Jaguh Kampung or Village Champions. We are now top of South East Asia Soccer. Asia should be the next target. Again, many of us still remember how easy we defeated Japan, Korea and China in the 70's.