The AOB 2018 Inspection Findings and Insights

The Audit Oversight Board (AOB) issued its 2018 annual inspection findings and insights for the benefits of the stakeholders last week.

As at 31 December 2018, there are 49 Malaysian audit firms with 338 individual auditors registered with the AOB auditing 1,164 public interest entities.

It was also noted that the capacity of audit firms had increased compared to when the AOB was set up in 2010. The shift in the size of audit forms, assessed by the number of partners are as follows: 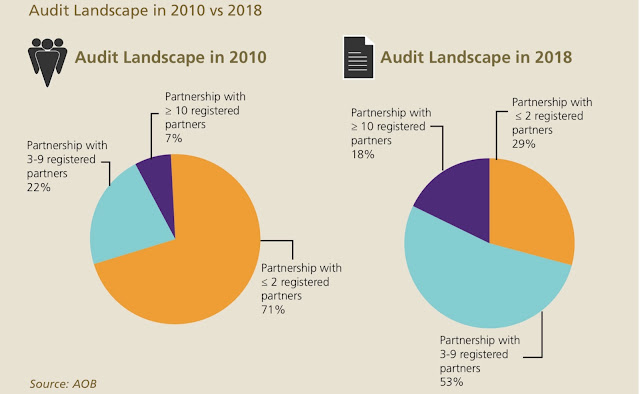 Audit firms with2 partners or less has shrunk from 71% in 2010 to only 29% in 2018. With the new registration criteria imposed by the AOB, this category of firm will disappear completely by 2020. This is important as the minimum of partner required to ensure compliance with auditing standards is 3.

Other highlights from the AOB inspection findings for 2018 are:

For the overall quality control review, leadership responsibilities for quality in audit firms, compliance with relevant ethical requirements and outcomes engagement performance remained as key observations by the AOB.

Another interesting observation is the percentage of income from audit for the major audit firms in Malaysia has shrunk to 66% compared to 71% in 2016. Are these audit firms moving away from audit?

The top 5 findings from AOB's engagement reviews are: 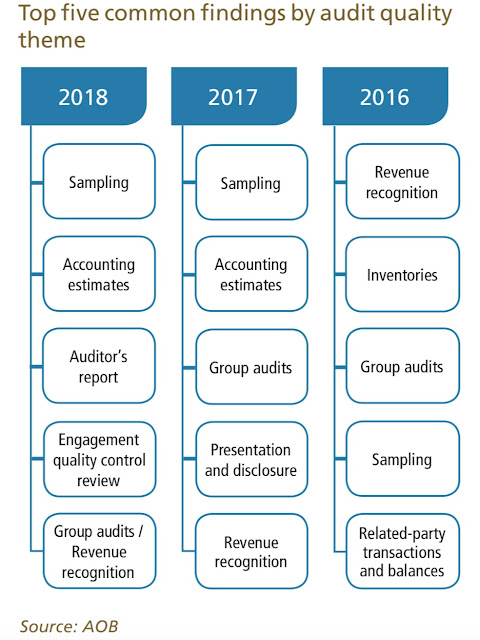 These are audit areas where robust planning, effective supervision and professional judgments are required to be exercised by engagement partners, EQCR and the managers of audit engagements. The appearance of auditor's report for the first time in 3 years could be due to the implementation of the new auditor reporting standards.

The full AOB inspection findings and insights report could be downloaded here: