Aidil Fitri, an articulation of success?

Today is the third day of Shawal, the month awaited for by many Muslims as a sign of the completion of a month of devotion through fasting, prayers and other acts of submission to Allah during Ramadhan. The first day of Shawal is known as Aidil Fitri, the day where a devoted Muslim goes back to his or her original state of purity due to the deeds performed in Ramadhan. While Aidil Fitri is a day for celebration, it should remain within the parameters of submission to Allah in all aspects.

Here is where culture intersects with faith. In the era of commercialisation, many faith-based celebrations have been portrayed as the time for party, food and spending. While there could be commercials which try to remind the society about those who are unfortunate, the overall psychology during these festivities would be about enticing people to spend and spend.

Two weeks before Shawal appears, commercial about Hari Raya could be heard or watched over the media. Shops and shopping centres would be offering sales. This is on top of commercials Buka Puasa events. While Ramadhan is about controlling one's desire, especially towards the worldly stuffs, the environment was set for the opposite. That's why while the last 10 days of Ramadhan was supposed to be the final leg where Muslim should be striving for the Night of Light ( Lailatul Qadar), many would be at shopping centres instead to be enlightened by sales and discounts.

In Kuala Lumpur in particular, Aidil Fitri is celebrated for a month! Many individual and corporates will be hosting Open Houses, where plenty of food will be served. While I am not questioning the intention of this idea of offering food and hospitality to relatives and friends, in the overall of the whole scheme of things,mew could ponder the consequences of these activities. Does it really reflect the spirit of Ramadhan and Aidil Fitri.

I purposely differentiate Aidil Fitri as the day accorded by Allah for the faithful to celebrate their successful demonstration of faith and submission during Ramadhan with Hari Raya, which to be is the cultural dimension of Aidil Fitri. Aidil Fitri is only for a day whereas Hari Raya is celebrated for a month. Aidil Fitri is about an extension of the act of submission while Hari Raya is about enjoyment per se. In a multi cultural society, there is also pressure for the wider values of the society to be embedded in the celebration. Good or otherwise, I may not be there best person to judge this.

We had quite a number of children from the nearby neighbourhood who came to our house expecting to be given Duit Raya. It has been a custome for Malays to give our cash to children during Hari Raya. Borrowing from the Chinese, the cash is now given in green colour envelops. This was certainly not the case when I was small. Definitely, the ways Hari Raya is celebrated has evolved. What concerns me is the gradual shift of the meaning of the celebration, for a day of demonstration of how Muslims had been successful in fulfilling the demands of Ramadhan into a more cultural-based celebration which may not be based on the original intention of submission to Allah. 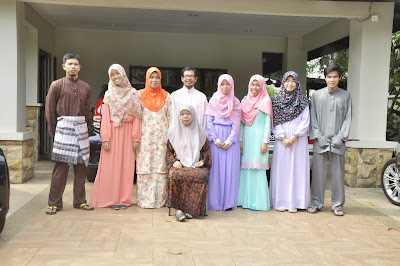 I suppose it is not to late for me to ask for forgiveness and pray that all our deeds in Ramadhan are accepted by Allah.
on August 10, 2013