Whenever the results of any national exam are announced there would be many news about how many students scored straight A's. Those who had near miss by scoring single B's or C's may feel disappointed. What more when their friends or elder siblings managed to get into the elite group of people who score straight A's.

On the other hand we have been hearing disappointment regarding the competency of our graduates including their inability to think and communicate effectively, skills which are very important to employers. Is there a disconnect between scoring straight A's at the secondary level and the actual work performance? 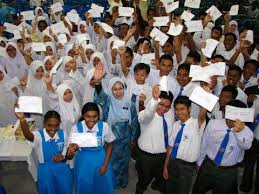 One of the practice in modern living is to turn abstracts into something which we could comprehend. Grading which are given to students are basically an attempt to demonstrate their relative performance. The grades do not necessarily mean that top scorers are really top in terms of brain capacity and ability.

Assuming that the grading system is changed where all students will be awarded A's (A1 to A9), then all students would be straight A's students. Does it mean that all of them are excellent? No!

The symbols that we create to reflect the complexity that they represent have certainly clouded our thinking. This result in the race to get our children to score as many A's as possible instead of ensuring they are really 'educated'. Education in my ind is our ability to help our children to develop their faculties especially their minds. Instead of teaching them to be parrots i.e. being able to answer all questions during exams without understanding why the answers are really such; we should nurture their brains so that they are able to wonder, probe, think and reach their own conclusions. Sounds basic but listening to the concerns about graduates who did score many A's before, we have certainly failed miserably in that part.

Sometimes the blame is not just on the students but we as a society should be open enough to accept our own shortcomings. Do we really want the future generation to be smart and able to push the frontiers of knowledge and other things or are we just satisfied that they think in similar ways that we do? Are we brave enough to answer their questions about our own behaviours and conducts or we just prefer for them to praise us for feeding them since they were small (which is our responsibility in the first place as responsible parents)? If we want then to be innovative, don't be angry when they point to us our shortcomings. Some people are ok with this, more people don't.

There are many other things that we do as a society which focus more on the form rather than the substance. Form is easy to be recognised but substance is more complex to identify and comprehend. This article by Ustaz Asri is a very interesting piece about form and substance. He observes that there is a decoupling between religion and god. Sometimes in serving God, people could even act beyond the commands of god and become god themselves.

Another common misunderstanding that I observe is the branding on people like Bill Gates and Steve Jobs. People like them are branded as university dropouts, giving connotations that they were not smart enough to get through tertiary education. However, if we read the story of their lives, these people were smart enough to differentiate between academic qualification and doing real stuff which eventually changed the world. Again we are caught with our own self-imposed limitation that a university degree is a symbol for 'success'. Too me, a degree is just a certificate that the person could think. Given what I am hearing, that even may not hold that much.

So, going into the new year, we should start to re-calibrate our views on substance and form so that we continue to focus on what really matters rather than symbols which may not be real.
on December 23, 2011