Network-Centric Competition: What We Could Learn From Politics?

Today is the nomination day for the Malaysian 12th general election. I have a classmate and few other friends who would be taking part as candidates. In the next few days, the political parties would be competing to convince the voters of their merits to be given the "trust" as their representatives in the Malaysian parliament. 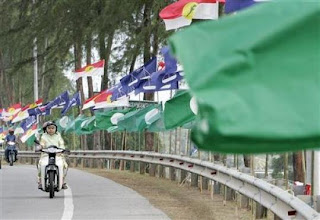 A part from the question of who is going to win, I am observing a pattern in line with the network-centric competition that was discuss in my earlier post. Let's look at how the network-centric concept is applied in this general election.
Malaysians generally arrange their political affairs along the racial lines. In view of this, most political parties are associated with certain races, although there are a few which have all races as members. If we could equate races as markets, such arrangement enables the parties to have their own niche and focus. They could offer and package solutions according to the target groups which would be more homogeneous. However, to win in a general election, the parties have to convince the majority of Malaysians and not just their target segments. Hence, the solution is to create networks among themselves, or in political term is "alliance".
In this general election, I could observe the competition are basically between two types of alliances, the Barisan Nasional model and the Barisan Alternatif model. Lets consider the features of the two models based on the network-centric competition concept.
The Barisan Nasional is arranged in the classic network-centric structure where it has clear network leader, which is UMNO. UMNO is able to be in this position in view of the number of seats that it wins in every general election (it had more than 100 seats in the last parliament). Such a dominant position enables UMNO to assert significant influence over the direction of Barisan Nasional and shape the policy and structure of the coalition. The other main component of the network is MCA which represents the Chinese. Although the number of seats is lesser, it has influence over the key economic players in the country. It has a clear structure and discipline mechanism and those who fail to observe the expectation of the group would be disciplined accordingly (network governance).
Although the components of Barisan Nasional represent various interest groups, Barisan Nasional goes into general election as a single entity. Therefore, it is able to capture the votes of various interest groups by getting them to vote for a single brand. As such, although individually the components may have different offerings to their supporters, collectively those support is blended and consolidated into votes for a single coalition.
The Barisan Alternatif which was born around the 1999 general election is not a cohesive as Barisan Nasional. It has no clear network leader although the leaders of the components are portraying that they are working as a group. In this general election, the components are trying to coordinate which seat should be fought by which component and there is no coordination on policies and strategies, as far as the public is made aware of. Each component has it own offerings and carries different brands although the candidates of smaller components are using the symbol of the larger components is certain seats.
As a result, the Barisan Alternatif, although has a common aim of denying the Barisan Nasional its two-third majority, is a more diffuse network-centric competitor.
In the era where voters are getting more and more mature and demanding, they would be looking beyond the promises and goodies that are offered during the campaign period. The network which is seen to be more organised and structured would have the edge.
Who says business cannot learn from politics? But make sure you just pick up the positive elements only!
on February 24, 2008