The Prime Minister has recently launched the Northern Corridor Economic Region (NCER) which covers the state of Perak, Penang, Kedah and Perlis. This is the second economic region after the Iskandar Development Region (IDR) which is principally in Johor but with focus on creating synergy with Singapore as well. The next development region which will be launched would be the Eastern Corridor Economic Region which will cover the east coast states. 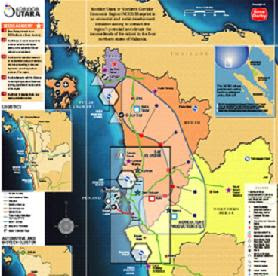 Regional development concept is not new to Malaysia. The so called Klang Valley is an example of economic region which perhaps covers Kuala Lumpur, Petaling Jaya, Shah Alam and may be Nilai. The different between Klang Valley and the new economic regions is that Klang Valley is defined by the business needs and reality while the new economic regions are promoted by the government as a strategy to stimulate greater economic growth in those regional areas. Another regional concept that has been applied is the territorial development areas such as KADA, Ketengah etc. This approach focuses on smaller areas in states of Malaysia.

Why suddenly we are going the regional approach?

I suppose that Malaysia has reached a stage that we are mature enough to work on development beyond the "state" basis. The thinking now, perhaps, is that by linking growth centres across a defined region, the economic benefits would be greater than by allowing the centres to grow on their own. I am not surprised that the centres could also have policies which would neutralise the benefits of other centre, if left unchecked! It’s about the sum of the whole is greater than the sum of individual regions.

Where is the position of the SMEs in this regional developmental concept?

I suppose if we look at the details of the projects that have been identified; it provides the SMEs a clear understanding of the economic direction. The IDR for example is positioned as an international city, where there is lower barrier to trade and high level of competition. Whereas the NCER is focusing more on growing economic contribution from selected economic activities in which the region has the potential to excel, which covers, among others, agriculture, manufacturing, tourism and logistic services.

The regional approach also consolidates the market which SMEs could target. If, for example, at present the market is only targeted at a particular state, now it could be expended to cover the whole region by leveraging on the facilities that are introduced with the concept. The SMEs could start identifying their counterparts who they could work with within the economic regions who they could work with and compliment each other.

One of the message that I could deduce from the regional economic development approach is that the government wish to see Malaysian companies to perform and earn market respect, at least in those areas, before the greater challenges from globalisation become more adverse. For the SMEs, this is an opportunity to have another look at their business models and strategies so that they could sustain their competitive positions and survive.

This is another indicator that SMEs have to grow and play a different game to survive the competitive liberal world. So, let’s move on together and make Malaysia a pleasant country to live in.
on August 04, 2007