One Morning At Mount Bromo

This was my second time in Surabaya, a city located at the east of Jawa Island in Indonesia. The first time I was in this city was many years ago on an official duty for the Malaysian accountancy profession, hence I did not have much time to spend to explore Surabaya. This time around I was on holiday.

Surabaya got its name from the combination of two animals' names, Suro, which appears more like a shark to me and Boyo, simply crocodile. The two creatures are also embodied as the monument of the city. 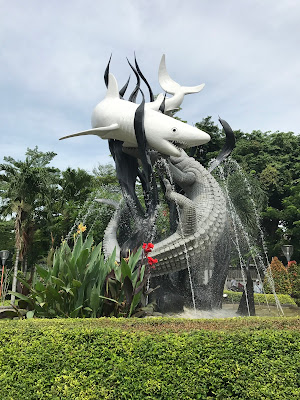 The highlight of this trip for my visit to Mount Bromo, an active volcano which is located around 80 kilometres from the city. In order to catch sunrise, we left out hotel at midnight. Although the distance was not that far, it took as nearly four hours to reach our destination by car.

There were many heavy vehicles which were travelling at slow paces but remained on the right lane which was meant for faster vehicles. Later I figured out that the left lane was not consistent in terms of width and sometimes there were branches of trees hanging above. Hence, it was more convenient for the heavy vehicles to stick to the right hand side and vehicles which were overtaking them had to do it from the left lane. Something different from many other places which adopt the right hand drive system.

We had to take a four-wheel drive vehicle, known locally as high-top, to go up to the peak. It was cold in the early hours of the day and thick clothing was the appropriate attire although the locals were portraying the temperature was much cooler so that we would buy stuffs like gloves and scarfs from them. 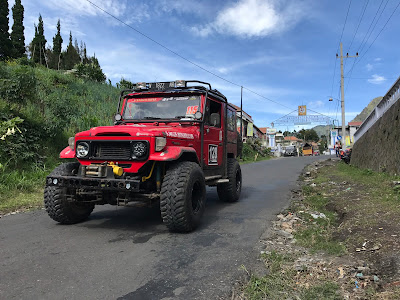 The view from the sunrise lookout was magnificent. We had a 360 degrees views of the surrounding mountains and valleys. The mists and clouds intermittently shielded our view but as the sun was raising we could see sights with different colours and tones.

Given the number of visitors to the mountain, we could only spend around half and hour before going down to the valley, made of larva and dusts from the last eruption. This was to make way for other visitors who came later in the morning. 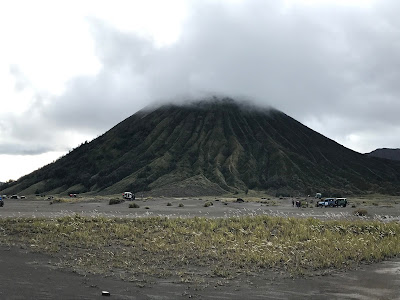 The peak of Mount Bromo was a far distance from where the vehicles carrying visitors were allowed to park. Visitors have two choice to reach the peak, walking or riding horses which were managed by the locals. We took the second option and that was my first horse ride in my life. The horse can only go towards the bottom of the peak and we had to climb stairs with few hundred step and was fairly steep. 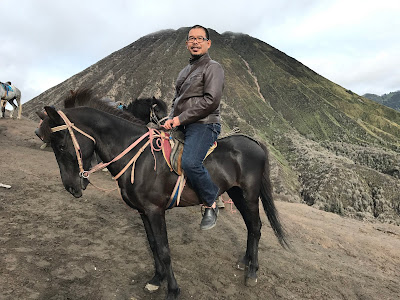 It was amazing to watch smokes coming out from the peak of Mount Bromo and one has to stand the smell of sulphur to be up there. It was worse when the wind changed it direction towards you. I saw some elderly visitors who had some breathing difficulties. Although I had visited other live volcanos before, this was the first time where I could watch smoke coming out from the crater with my own eyes. As far as I am concern, visiting Mount Bromo was the best experience that I had when it comes to such tourist attractions. 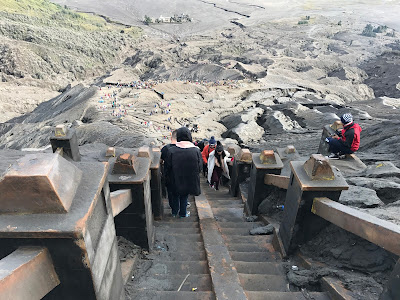 On our way back down the mountains, we could appreciate the beauty of the mountainous scenery including the spots where the locals grew their vegetables and other plants for living. Of course we cannot resist from stopping as a famous Nasi Rawon shop which was used to be patronised by the President of Indonesia himself. 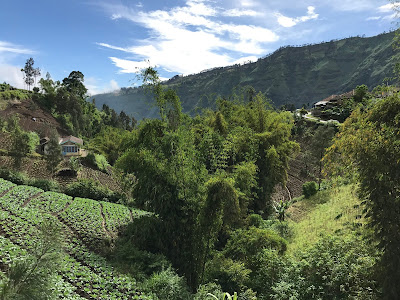 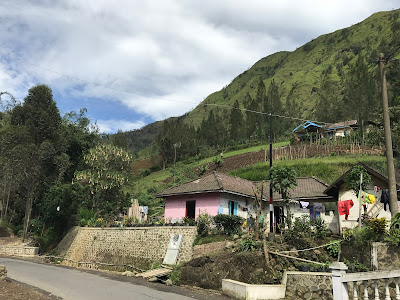