Suflan as I remember him (Updated)

I was having breakfast with a junior from my secondary school when I received the message of the passing away of Suflan, a colleague who just left the organisation we both serve a number of weeks earlier.

The last time I saw him was around two weeks earlier. Myself and a number of other colleagues of mine visited him at the hospital where he was undergoing treatment for the illness he was enduring. While we all could sense his pain, Suflan was excited seeing us and we certainly had a very honest and meaningful conversation about the experiences that we went through together. He accepted his situation and was very clear of how the final leg of his journey would be. 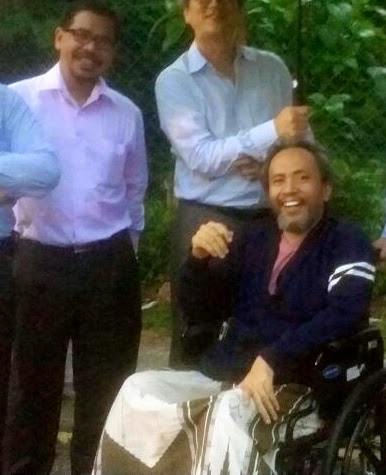 Professionally we did not necessarily agree with each other on all issues. Sometimes, our views could be well apart. I am really pleased that at the end of the day, nothing was taken at the personal level. After all, we are fellow mortals who are on the same journey towards our destinies.

An avid musicians, Suflan brought his creative minds into an organisation which are dealing with serious issues. Sometimes he was very philosophical and would argue his viewpoints from totally unique angles. Over time, I could appreciate where he was coming from and Suflan was consistent with the foundation of his thoughts and views.

Towards the last few months of his final journey Suflan wanted to share his feelings and thoughts through his blog. I am sure you will be touched with the stories and the carefully chosen words he used.

I feel what he wrote in one of the postings indicated the clarity that he had in his mind on his final days:

"Today, when staring at my own mortality straight in the face, I realise that prayer and remembrance of God is really not for His benefit. It is for ours. It is a practice and discipline that allows you to clear a channel of energy tapping into and communicating with forces of the unseen, that in turn helps you function on a day to day basis with clarity of thought and purpose. Perhaps had I known this before, much of my life would not have been a journey through a barren desert"

It was too early to wish Suflan good bye but Allah knows what is the best for him. May Allah accords Suflan with His forgiveness and blessings and may we see each other again in Jannah.